The hunting reserve consists of forests, marshlands (called dhor), and flat meadows (called patan). The vegetation found in the reserve is alpine, subalpine, and temperate vegetation. The snow covers the area all around the year in higher altitudes. 58 vascular plants are recorded in the reserve. The reserve also harbors many species of flowering plants among which 36 are endemic to the reserve. The Oaks: Quercus lantana and Quercus semecarpifolia are the species of woolly-leaved oaks found in the lower elevation of the reserve. The other common plant species in the reserve include Fir (Abies pindrow), Birch (Betula utilis), Spruce (Picea smithiana), Juniper (Juniperus recurva), Pine (Pinus wallichiana), Hemlock (Tsung dumosa), Rhododendron species and other species of alpine shrubs. The local people residing around the park get the wood for timber and fuel, fodder, and pasture from the reserve. February to October is when living grazing is common in the reserve every year. Almost more than 80,000 livestock enter the reserve for grazing.

The Dhorpatan Hunting Reserve is surrounded by the village except in the North. There are seven hunting blocks in the hunting reserve. There are four blocks in the Southern part and three in the Northern part and each is given a separate name. These divisions are made to make hunting easy and effective. The following are the seven blocks of the reserve with the animals available for hunting:

When to Visit Dhorpatan Hunting Reserve

The winters are very cold due to low temperatures and a strong wind blows during the winter. The higher altitudes are covered by snow in all seasons. The mornings are cloudy which are later removed by the wind during the daytime but the snowfall occurs till early April. The monsoon starts from June until the last of November. It is, therefore, best to visit the reserve somewhere between March to April.

Buses are available that will drop you from Kathmandu to Tansen. The headquarter of the Dhorpatan Hunting Reserve is a three-day trek from Tansen. Also, you can catch a flight to Pokhara from Kathmandu. From Pokhara, a four days trek via Baglung will leave you at the reserve headquarter.

The chartered helicopters can also be managed from Kathmandu to the reserve at your request.

What for the Trekkers?

Dhorpatan Hunting Reserve is also preferable for trekkers. Dhorpatan is a good choice for someone who would like to experience the natural and cultural beauty of remote Nepal. Along with hunting, the Dhorpatan hunting reserve offers the chance to explore the culture and lifestyle of the local native people. The mixture of the Hill tribes and the Tibetan Refugees provides a unique taste of culture. Adding on, the fascinating views of the Dhaulagiri and Annapurna Range are the other attractions of admirers of nature.

Although the trek is remote, the level of difficulty is not that high. The trekkers need not be experienced or professional to accomplish the trek. Anyone with an average level of fitness can find the Dhorpatan trekking comfortable. Plus, the altitudes are not that high enough to cause problems for most trekkers. However, precautions to avoid altitude sickness are great. After all, prevention is always better than cure.

Trekking starts with Beni. Beni is about 9 hour drive away from Kathmandu. Passing the Trishuli and Marsyangdi Rivers, the trail will take you to the Seti River and then to Pokhara. The next day you will continue your journey and drive to Darbang (about 3 hours). Darbang is famous for the Khukuri (a weapon) skill. But this place is not your destination for today. You still have to walk about 5 hours to reach Dharapani, where you will spend the night. The Dhaulagiri stands beautifully which can be seen from Dharapani.

The walk on the third day is an easy walk. The view of the streams and the gorges encourages the trekkers to walk ahead. The 6 to 7 hours walk on the beautiful trail will take you to Lamsung: the destination of the day. The next day walking through the forest of the Rhododendrons and Oaks, you will be targeting Jaljala. The 6 to 7 hours trail provides you with beautiful views of the Dhaulagiri, Gurju Himal, Churen Himal, Putha Himal, etc.

The new morning now calls you to explore the Dhorpatan Hunting Reserve. Descending through the Khahare Khola and crossing the mixed forest, you now reach Dhorpatan after a 7 hours walk. Enjoy your stay at Dhorpatan. The next day you will explore the reserve. Different animals like leopards, Ghoral, Himalayan Tahr, Black bears, Barking deer, and many birds can be seen. The mixed culture of the hill tribes and the Tibetans will attract you with their traditional way of living and trade. The wooden roofed houses are another attraction of the place.

The early next morning trekking to the Phagune Danda will attract you with the beautiful Himalayan ranges, jungles, and landscapes. Further on, the trek continues to reach the Jungle camp. The following day, we will be walking for about 6 hours to reach the Gurhaghat. The trail is an easy walk along the flat land with mixed jungle and streams. Overnight at Gurhaghat. 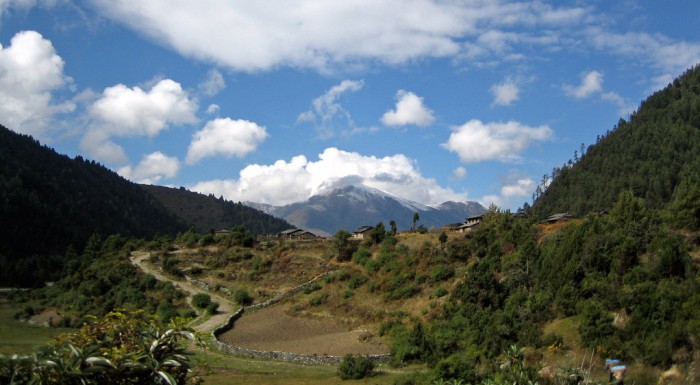 The trekkers today will ascend in the beginning and then descend through the jungle and gorges. After the walk of about 6 hours, you will now reach Patichaur; today’s last spot. The next morning will be the last day of the trek.

From Patichaur the trek now starts to reach Darbang. The first two hours are not quite hard. Continuing the trek, you will now go ascending and descending through the jungles and the gorges. As you get up to the Darbang, you can now drive to Beni. It will take around three hours to reach Beni. The forest, green hills, rivers, and streams are the real attraction of the drive.

Thus, this ends the trek to the one and only hunting reserve in the country. From Beni, you will now drive back to Pokhara. Enjoy your stay in the beautiful city of lakes and then head back to Kathmandu.